ChangeNOW is committed to create innovative eco-responsible events,
rethinking the standards of the event industry and integrating impact solutions
directly into the design of its summit.

Discover some of our commitments and how ChangeNOW

paves the way for a new generation of eco-responsible events:

We are working with various solutions and partners to offer alternatives to disposable plastic. ChangeNOW has a “zero plastic bottle” policy.

Furthermore, thanks to the mineral paper badges and ecological wristbands, made of recycled fibers and bamboo fibers, ChangeNOW offers all participants plastic-free badges. 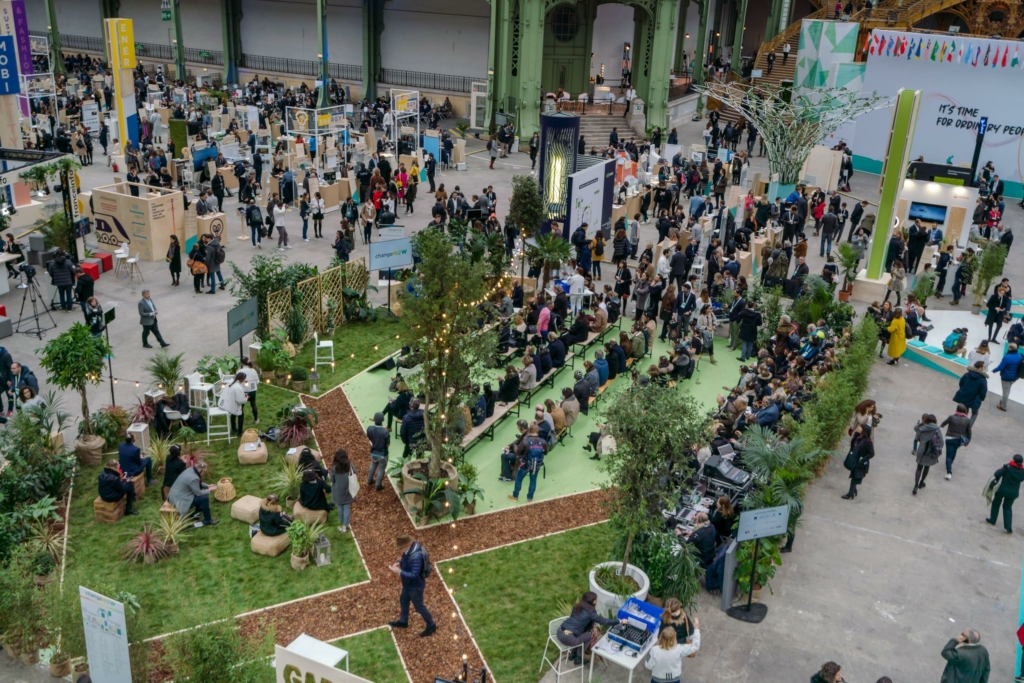 We are rethinking the codes of events to offer a rich experience while avoiding certain materials that are important sources of waste: carpets, scraped cotton walls, kakemonos,…

Exhibitors also sign an eco-responsible charter and commit themselves to avoid kakemonos, goodies, flyers, and other possible sources of waste. 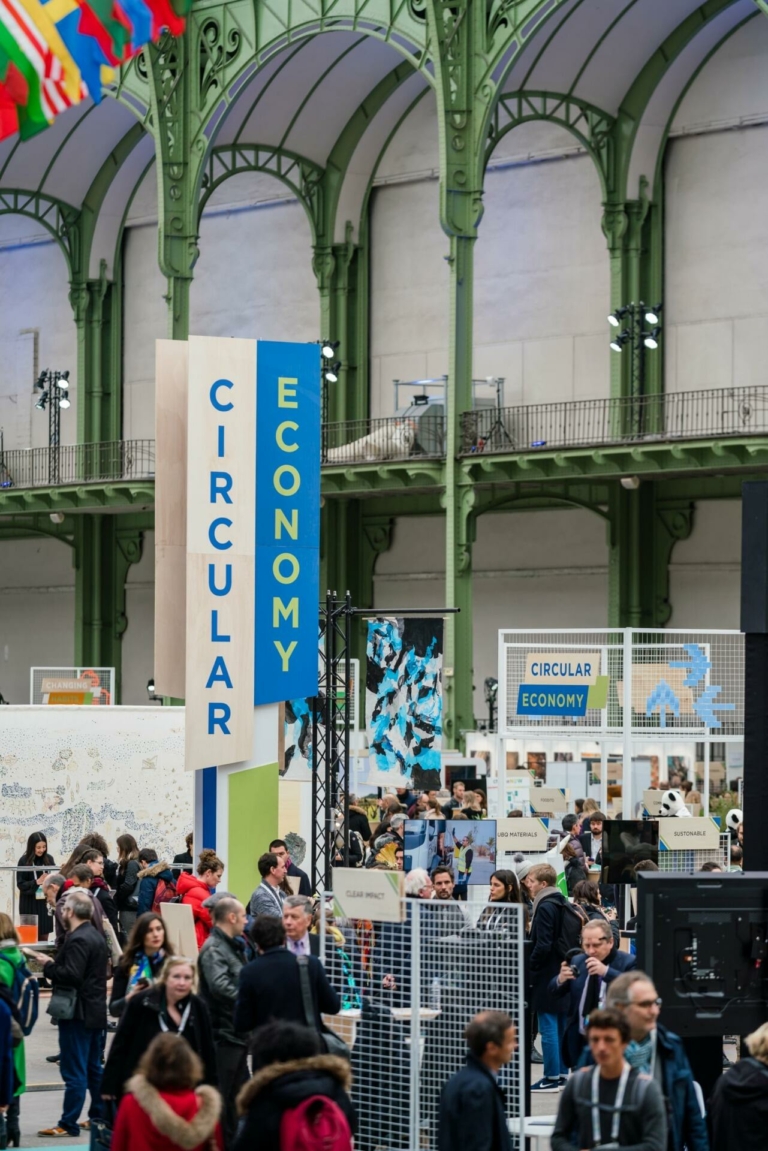 implementing the principles of circular economy

90% of the furniture used at ChangeNOW is either rented or reused.

For the 10% left, we make sure they have a second life, thanks to innovative solutions and partners. For instance: printed canvas become eco-responsible bean bags, scenographic structures find a second life in homes companies or other events.

ChangeNOW is a signatory of the Quitri charter and is committed to respect waste sorting and recycling. 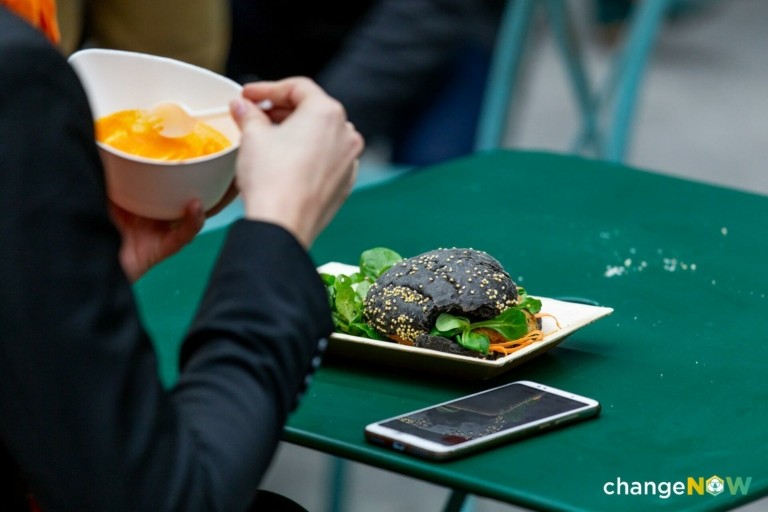 They are committed to respecting the eco-responsible charter of the event, which includes the following criteria: minimum 70% organic food (or equivalent), local and seasonal food, no beef-based recipes, social inclusion.

As for any food leftovers, they are recovered and redistributed to the most deprived in the respect of the cold chain.

ACTING FOR THE PLANET

The summit is also an opportunity for each participant to take positive actions for the planet.

Beyond the program of the event, each participant contributes to reforestation: one tree is planted for every participant registered at summit.

Thanks to the great participation of the 2020 event, 28.000 trees have been planted, in partnership with Reforest’Action.

We aim to be carbon neutral in our actions. We measure the carbon footprint
of the summit and support carbon reduction projects around the world.

In 2020, we supported 5 projects world-wide, in partnership with Eco-Act.
Discover them!

The Ovaan project in India distributes cooking stoves which require 60% less wood to operate, reducing smoke and toxic emissions by up to 80% in households!

The Neema Forest project in Kenya, which works to preserve the forest and incredible biodiversity of the region!

The Ceramica project in Brazil, replacing wood from the Amazon rainforest with biomass residues for energy in local artisanal ceramic factories.

We contribute towards saving the forests by planting as many trees as attendees to ChangeNOW Summit, through the projects of our partner Reforest’Action.

In 2020, thanks to you, Reforest’Action planted 28.000 trees in Tanzania along with the local population! The benefits created by the trees already planted are diverse and concrete:

For more information about our action: https://www.reforestaction.com/en/change-now-summit 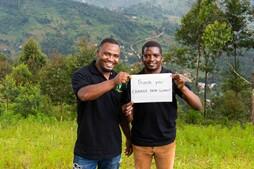 Designed to be an exemplary projet in terms of sobriety and respect for the environnement, the Grand Palais Ephémère combines sustainable materials and an optimized geometry:

➔ The structural arches, which operate in compression, minimize the mass of wood used

➔ The double skin laid on the roof has strong acoustic and thermal virtues, resulting in lower energy consumption

➔ In addition, the reuse of the building following its establishment on the Champ-de-Mars at the end of the four years of its on-site operation is a strong sustainable commitment that goes beyond the optimizations of a new construction; the project is conceived as a sum of modular elements that will be able to be reborn under multiple new forms in other places.

Following its dismantling after the 2024 Olympic and Paralympic Games, the building will be reused in several configurations in other locations, thanks to its modular structure. 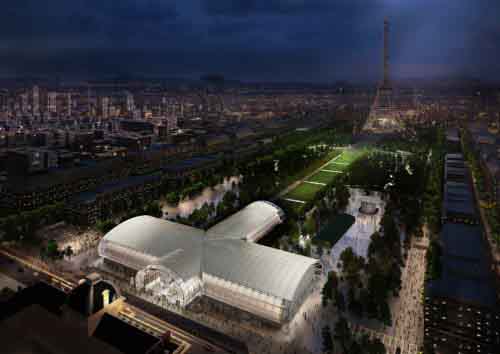